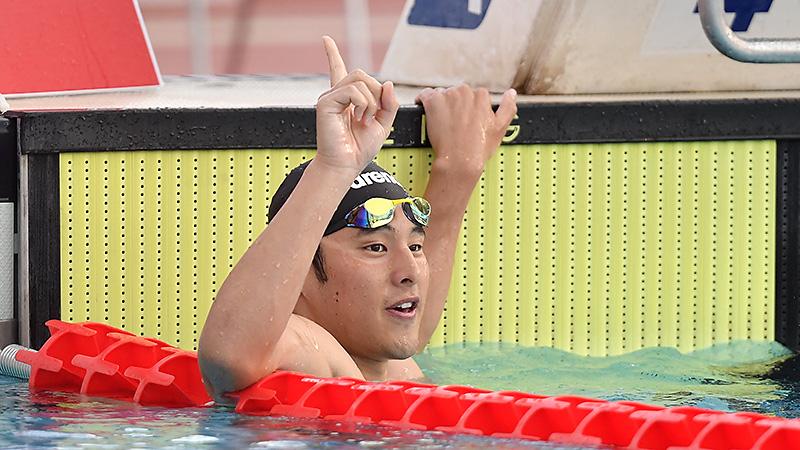 The event records set by Kristof Milak in 200m butterfly and Michael Andrew in 100m backstroke, the victory with no record of Benedetta Pilato in 50m breaststroke and of the European champion Simona Quadarella in 800m freestyle, the successes of Ilaria Bianchi in 100m butterfly and Margherita Panziera in 100m backstroke shine on the second Roman evening at the International Swimming Competitions. Italy obtains 9 medals adding to the 12 won on Friday.
The 19-years-old Hungarian Kristof Milak, European champion, after having swum the best time in heats (1'56"22), sets the Sette Colli record in 200m butterfly with 1'54"19 (the previous one was set by the Hungarian Tamas Kenderesi with 1'54"33 in 2017) and Michael Andrew, who sets the event record in 50m on Friday, improves also in 100m backstroke with 53"50, breaking the previous record set by the Spanish Aschwin Wildeboer Faber with 53"67 in 2011.
Benedetta Pilato doesn’t improve her record but wins the 50m breaststroke Final ahead the Brazilian Jhennifer Conceicao and the other Italian swimmer Martina Carraro. The 14-years-old from Taranto, Italian record woman, student at the second year at the Scientific High School with the maximum, trained by Vito D'Ongia and member of Fimco Sport, sets the new absolute Italian record in 50m breaststroke with 30"13 in the morning heats, wins the Final with 30"28, receiving the applause of the Roman audience and the Federal Technician staff. The previous faster 50m breaststroke record was set by Arianna Castiglioni with 30"30, old Italian record broken by Benedetta this afternoon. “Today the record gave me emotions, but I will not stop here. I want swimming faster. I will try to do my best for the World Championships”.
Simona Quadarella “burns the water” winning in 800m with 8'21"20, fifth seasonal World performance, ahead the Hungarian Ajna Kesely with 8'25"29 and the other Italian long-distance race swimmer Martina Rita Caramignoli with 8'37"62. The Roman and Rome soccer Team fan Simona, European champion in 400m, 800m and 1500m freestyle, athlete of Fiamme Rosse and Aniene, trained by Christian Minotti, wins in 1500m freestyle setting event and her personal record with 15'48"84 on Friday. She sets the Italian record in 800m with 8'16"45 on 4th August in Scotland last year. “Christian and I expected this time. I am happy. Yesterday I felt better but it is good in this way. On Sunday I will try to swim faster in 200m freestyle. Maybe it will be in relay key. The Stadio del Nuoto full of people encourages me to do my best”.
Italian smiles also for Ilaria Bianchi and Margherita Panziera. The swimmer from Castel San Pietro Terme, member of Fiamme Azzurre/ NC Azzurra 91, trained by the Federal Technician Fabrizio Bastelli, wins in 100m butterfly with 57"50, at 28 hundredths to the Italian record set on 12th August 2018. “At least a good time. It was a great race and the speed of Elena Di Liddo (second with 57"51) always helps me”. The 200m European champion Margherita Panziera (Fiamme Oro and Aniene), trained by Gianluca Belfiore in Rome, wins in 100m backstroke swimming again under the minute, a pleasant habit of the Venetian swimmer. She touches the pool plate in 59"69. Tomorrow, we are looking forward her favorite race, the double distance backstroke. “Today afternoon I wanted swimming the same race of the morning, but with a lower frequency. My start was not so good but I know that I swim better in the return course. The race finishes only at the moment I touch the wall. I grew a lot in this period realizing that I am strong not only physically but also mentally. I am more confident”.
The men’s 800m Final, closing the evening, belongs to the Brazilian Guilherme Costa with 7'53"01. “Even if I won the race, my time doesn’t satisfy me. The today race was a proof to test my condition for the tomorrow competition, the 1500m, that it is my aim”.
Katinka Hosszu is disqualified in 400m medley because of a mistake during the backstroke-breaststroke turn. This avoids her to obtain the victory and the event record (4'33"31). “It is very windy and I couldn’t see the flag of backstroke-Iron lady says-It is not an excuse: I had a mistake”.
The first Final warming hearts is the Final B. Alessandro Bori (Fiamme Gialle/In Sport Rane Rosse) wins in men’s 100m freestyle with 48"95, one hundredth ahead Luca Dotto. But the time is not so important, even if winning ahead an International champion such as Luca Dotto doesn’t occur often. But it is important the meaning of the victory, obtained in front of his friend Manuel Bortuzzo. Alessandro was the first to aid Manuel in the night of 3rd February at Axa, a South district of Rome, when they celebrated the birthday of the girlfriend of Bori. “ Call Alessandro, say him to come here immediately” this was the help calling of Manuel after being wounded. The last six months lived as brothers. Today Alessandro wins also for Manuel. 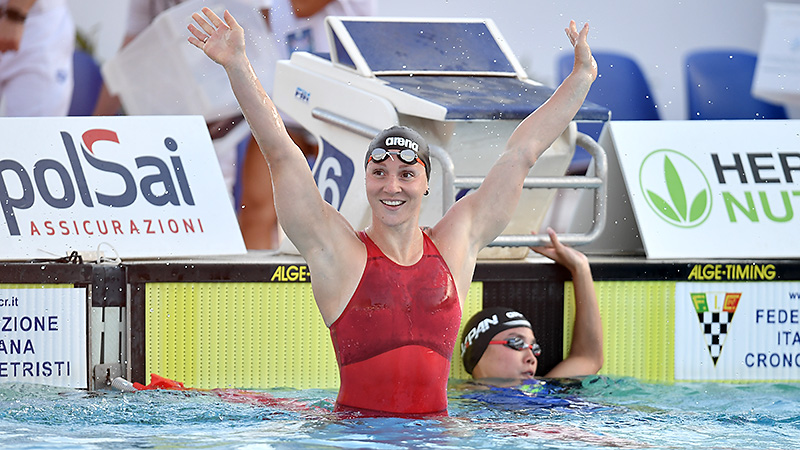 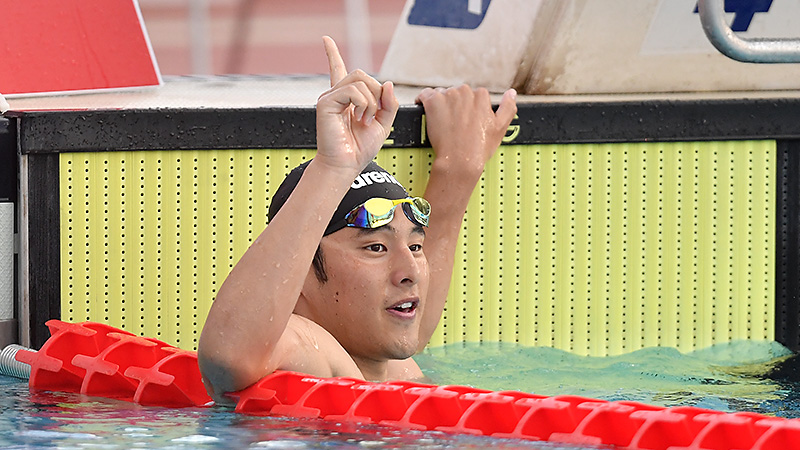 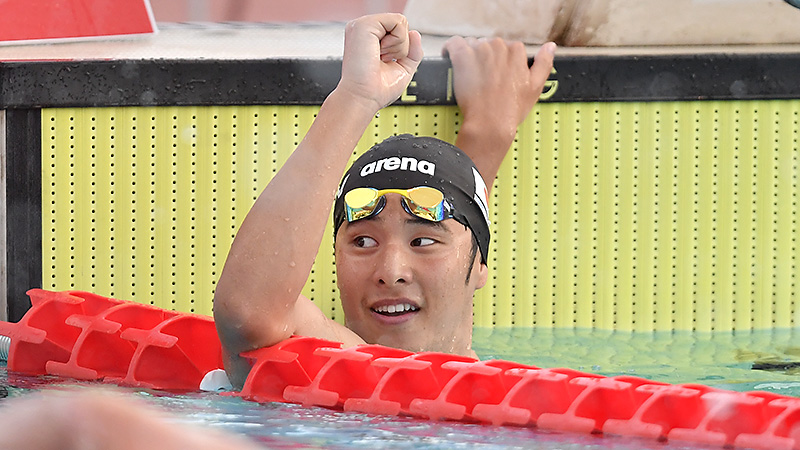 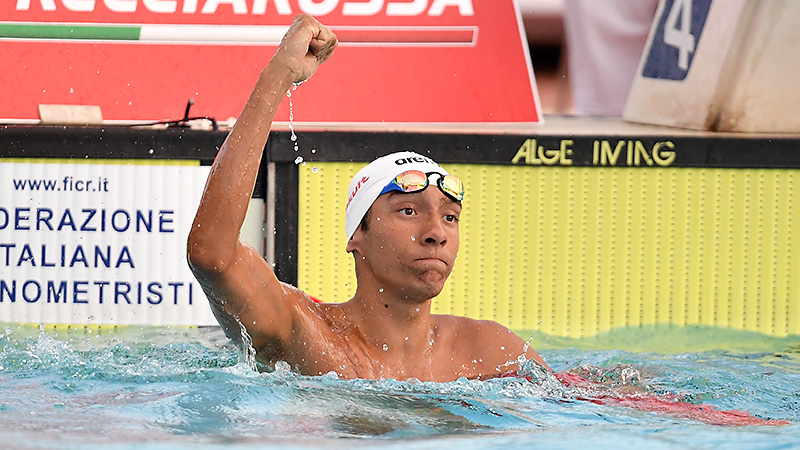 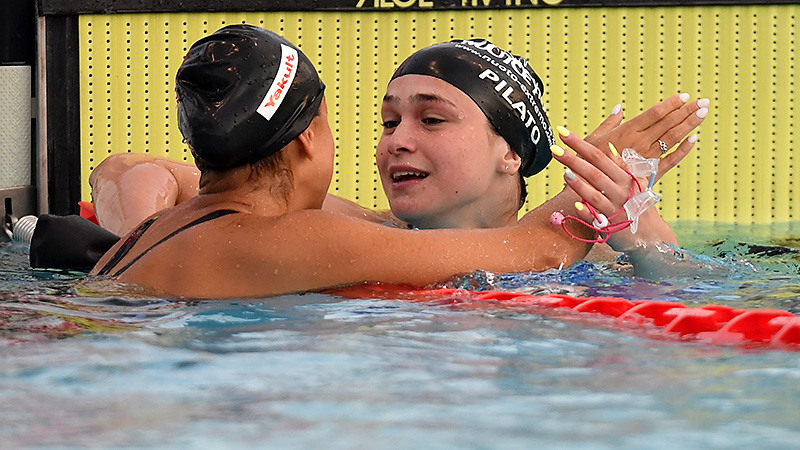 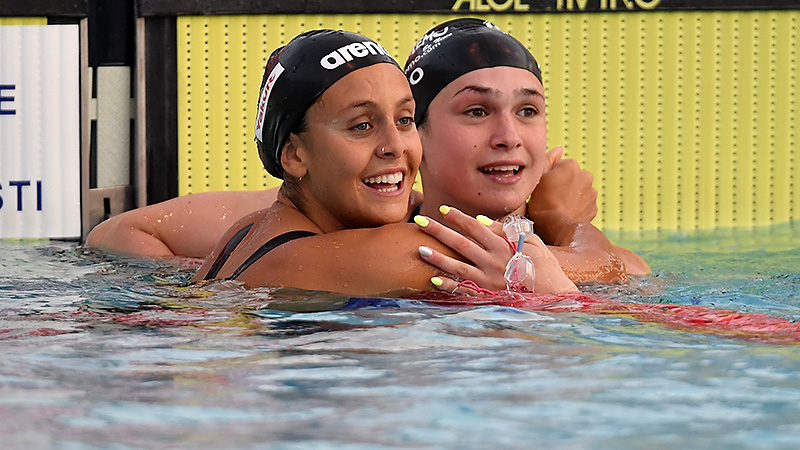 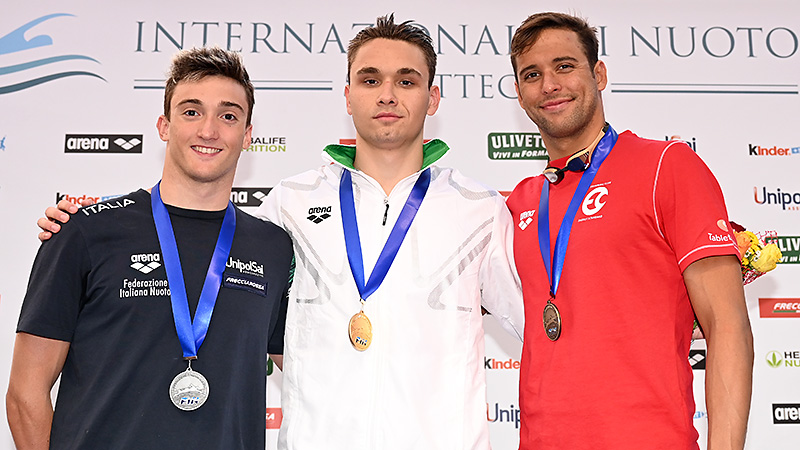 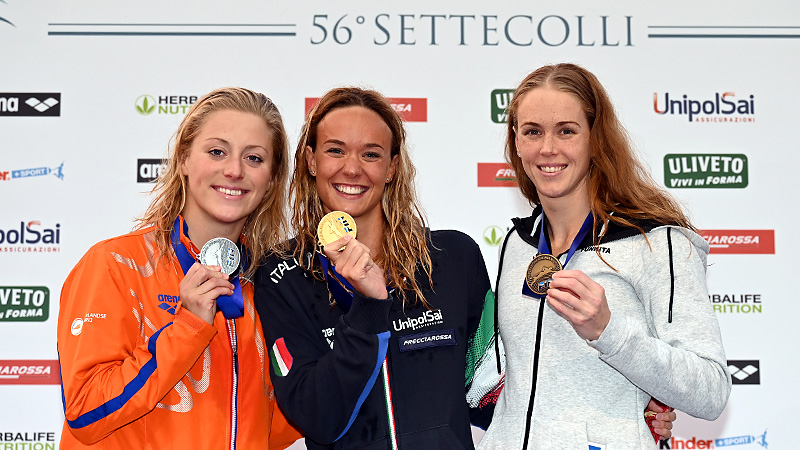 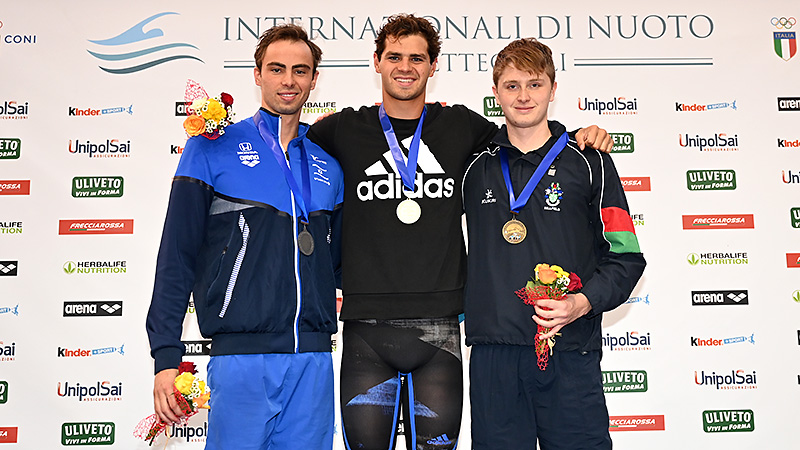 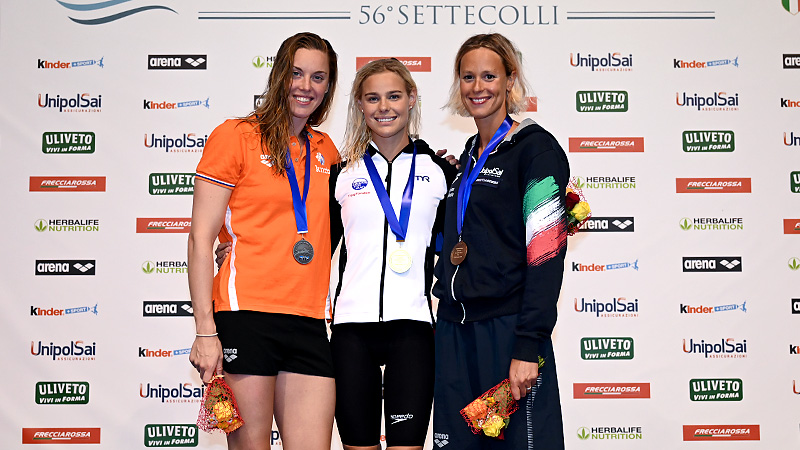 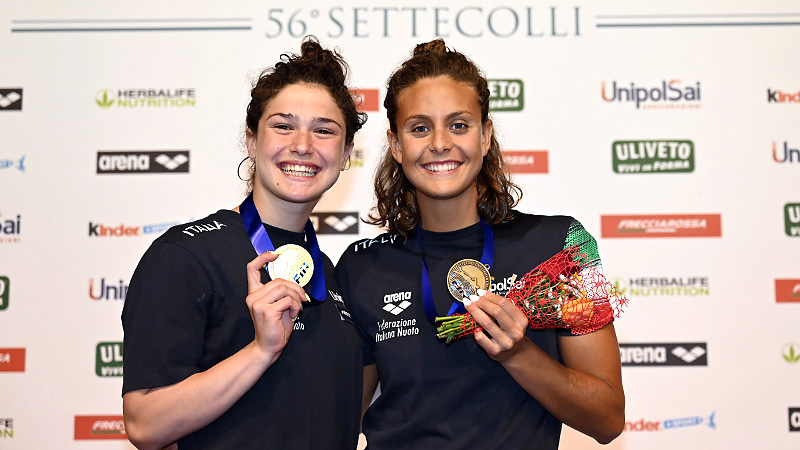 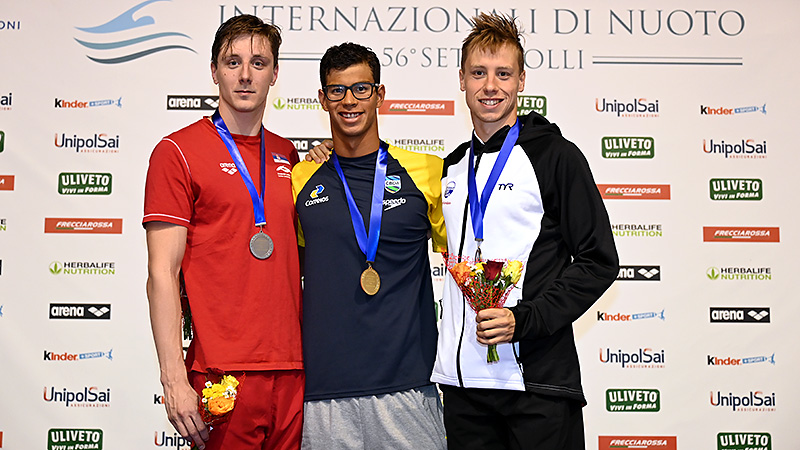